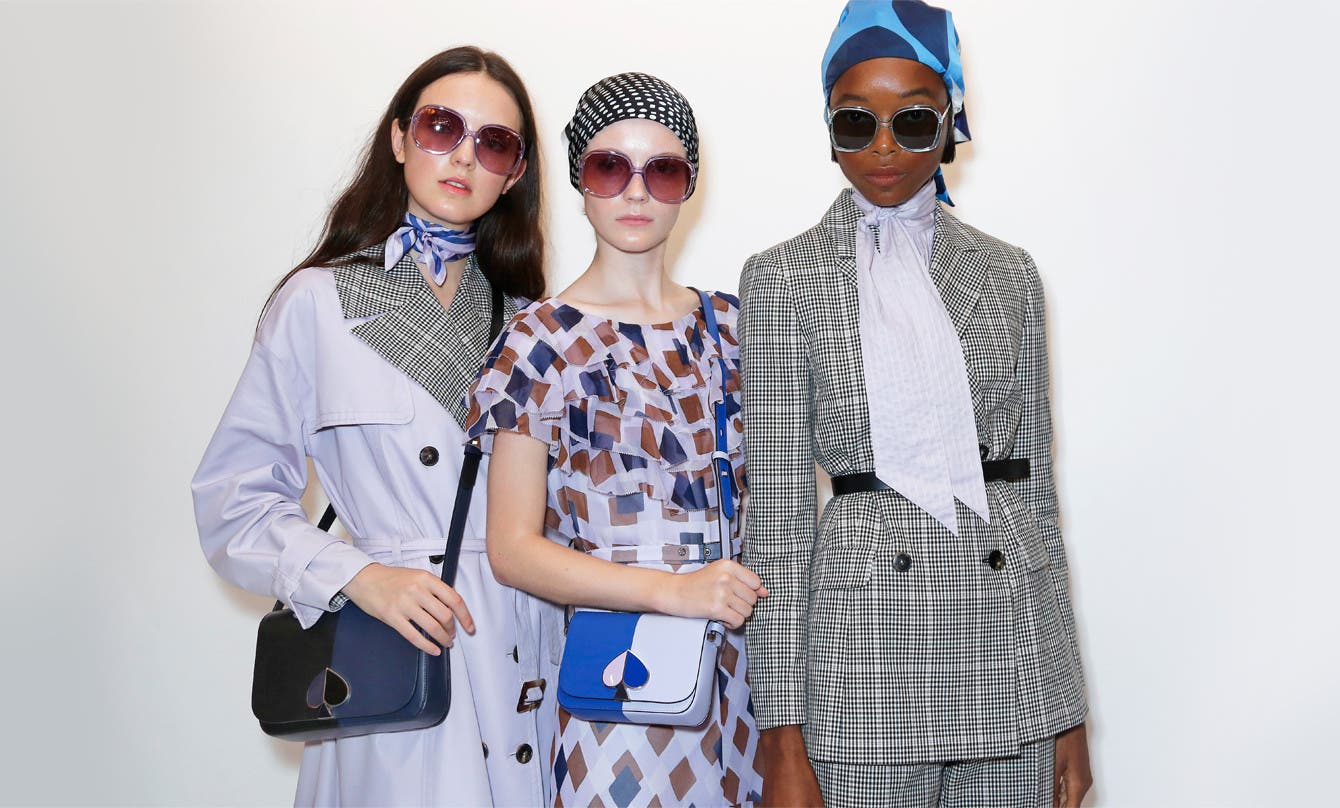 Although the house has long been a fixture at New York Fashion Week, spring 2019 was the first season that the kate spade brand staged a runway show. Taking a bow at the end was a striking, petite Irish woman, Nicola Glass, the brand's new creative director. This was also the first-ever ready-to-wear collection for the former Gucci handbag designer and Michael Kors VP. And by all accounts, the newbie nailed it.

"Ready-to-wear is actually one of the highlights so far for me," Glass tells us. "Helping with the spring fashion show—the first time the brand did an actual fashion show as opposed to a presentation—was really important to me because I'd worked very closely with the design team on creating this more modern silhouette with a fluidity and a movement to it. It was important that people could see the clothes moving."

Since then, accolades for Glass' leadership at kate spade have continued. She's been praised for updating the label while staying true to its late founder's effervescent sensibility. "From the start, Kate Spade herself encouraged women to have fun with fashion, to not find it intimidating, to be able to express their individuality," Glass says. "That was an important thing—even with the styling of the clothes: maintaining this kind of individuality and a fun, free spiritedness in this collection." Establishing one's identity through style is something Glass, who grew up with an identical twin sister, can relate to. "My earliest fashion memories are of my mom dressing Tara and me in the same clothes until we reached about the age of 10. Then we just didn't like the attention we got, and we realized we could double our wardrobe by sharing and not dressing the same each day," she recalls. After the runway show last fall, members of the press approached her sister to congratulate her on the collection. "They thought it was me watching the show," Glass laughs. "It was so funny."

Glass grew up in Northern Ireland just outside of Belfast, in a village called Templepatrick. She attended Edinburgh College of Art in Scotland, where she received a BA in jewelry design. A master's in fashion accessories at the Royal College of Art in London followed. In 2002, Glass was hired as a handbag designer at Gucci under Tom Ford. She left in 2004 to become the VP of accessories design at Michael Kors, where she remained for 13 years before beginning at kate spade in January 2018.

"I think what strikes me about both Tom [Ford] and Michael [Kors]—they're very different people with different styles—but I really learned the importance of being focused and being very clear with your vision, with your design teams," she says of the iconic designers. "It just makes a stronger brand."

Glass has brought her eye for detail—honed over decades of designing accessories—to clothing. This season's vivid prints will surprise and delight. "I'm really detail orientated and that partly comes from having a background in jewelry design. But I like the idea of making things not so obvious at first. There's an intimacy to seeing the styles up close," she says. Looking carefully at the patterns on the collection will reveal dots that are actually matchstick heads and flowers that are interlocked hearts and spades. The heart and spade also appear as a basket weave and locks on handbag styles, including on a shoulder bag appropriately called the Nicola.

For Glass, kate spade represents an optimistic femininity, a can-do attitude and joie de vivre that has existed since its founder created the brand in her apartment. "It's a brand that encourages women to be the best versions of themselves," she says, while acknowledging that life for the modern woman is trickier than choosing a handbag. "I'm lucky. I have a really supportive husband [Phill O'Leary]. He's a photographer, and his time is a bit more flexible than mine," she says. She also exposes her seven-year-old son, Flynn, to her work. He was at the show last fall and often visits her during the day. "The environment in the office is quite appealing to children. There's lots of fun things going on, so he talks about it. Sometimes he'll sketch earrings and handbags and say, 'Can you make this, Mommy?'"

"I think what's exciting is kate spade is a brand that really appeals to such a broad spectrum of women," Glass reflects. "I want it to be a brand that she feels she can come to and it's helping her to live her life, to give her confidence to express her own individuality. That feels very modern to me, that women can find their own ways of expressing their femininity."