The best Valentine's Day gifts for every love on your list. Explore Our Gift Guide

Sander Lak, creative director of the dreamy, otherworldly luxury brand Sies Marjan, has his feet firmly on the ground.

For a brand defined by its striking use of color, it's not surprising that its creative director has a singular relationship with it.

"Color is the first thing I see. I almost have a hypersensitivity toward it," says Sander Lak. "Sometimes I need to literally close my eyes. It's like how people sometimes get too much noise in their head. Sometimes I have too many colors in my head. It's always on. It's never off."

And color profoundly speaks to Lak in the most unlikely of instances. "It's always a random thing, like a paper wrapper on the street or the Dunkin' Donuts logo," Sander says. "It's never a Fellini movie or anything pretentious like that." 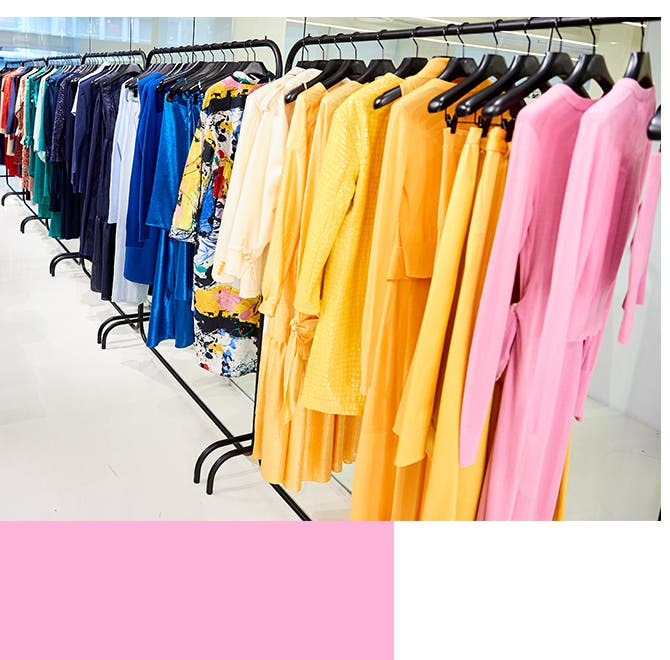 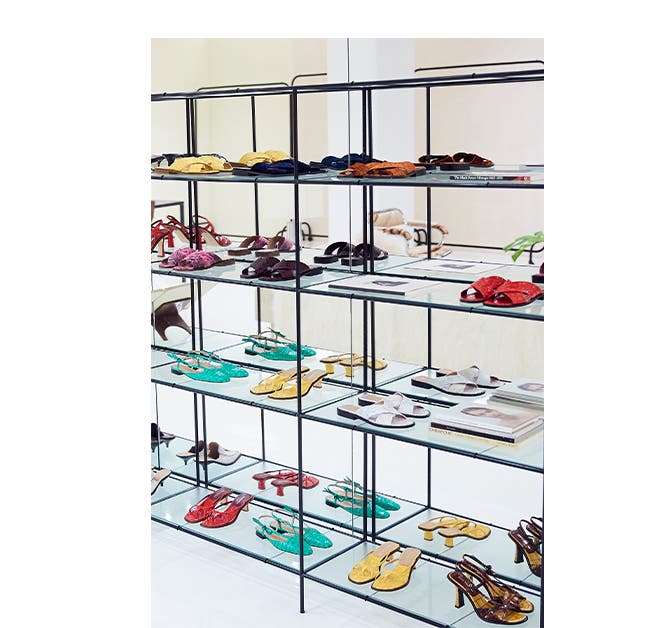 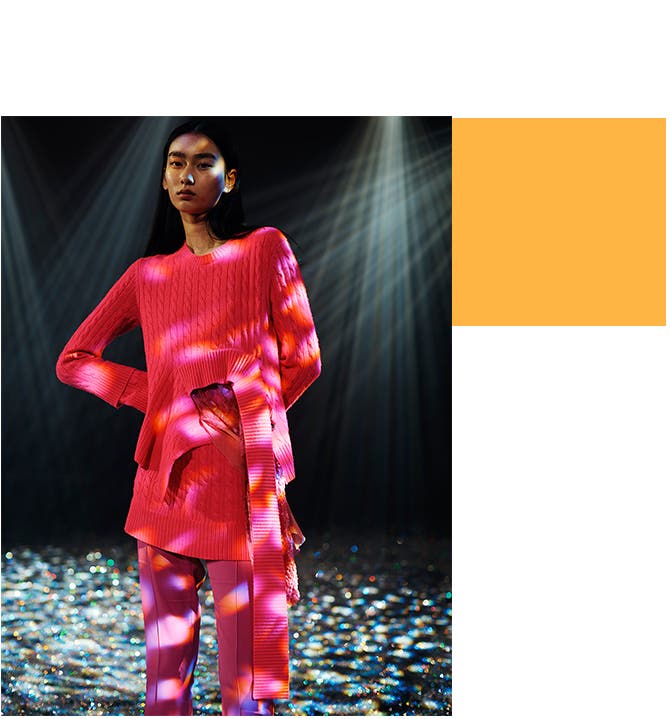 It is a rainy October day in Manhattan's Chelsea neighborhood. Sander is in his studio reclining on a white furry couch, the material akin to an artificial Angora goat. He's wearing an emerald iridescent shirt of his own design paired with Prada navy twill trousers. He's unshaven, and his hair is slicked back revealing bright blue eyes and a ready smile.

Sies Marjan debuted on the fall 2016 runway at New York Fashion Week and immediately stood apart. The luxury label seemed to have emerged fully formed, with the brand's language and codes already firmly in place. Eschewing the old guard's rigidity and the punk élan of other nascent upstarts, Sies Marjan was an optimistic splash of flowing dresses and loose knits. Sies Marjan's peculiar palettes (pistachio! apricot!) and overall romantic/exotic allure make the brand hard to quantify.

"I like it that people don't really understand where it's from, or sometimes people don't even consider us an American brand," says Sander, who won the CFDA's Swarovski Award for Emerging Talent in 2018. "That's a great thing because I hate nationalism and anything that is rooted in this idea of a group of people within a certain border are one type of person. I don't believe in that. We are Sies Marjan. We are our own country. We're our own language." He adds, laughing, "I'm totally fine with people thinking I'm an Iranian woman named Sies Marjan!" 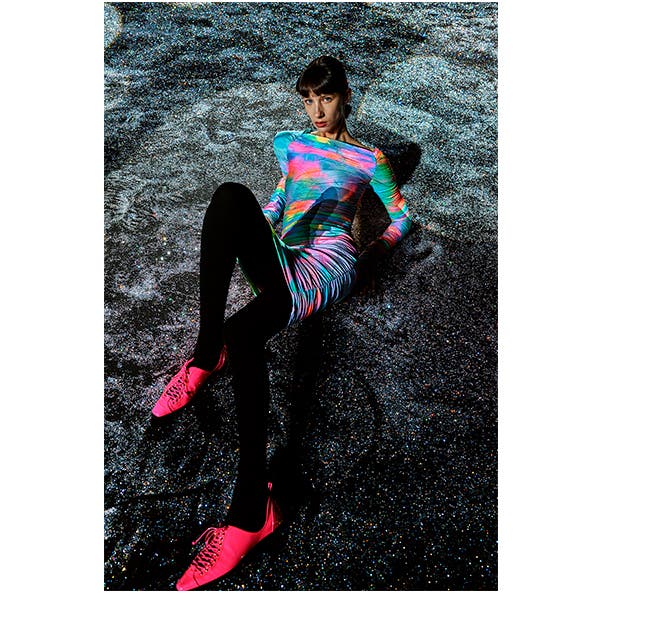 The 36-year-old Dutch designer was born in Brunei and raised in Scotland, Gabon and Malaysia before relocating to the Netherlands for high school. He concurs that this upbringing may have contributed to the pan-exotic profile of Sies Marjan.

Some items factor into most Sies Marjan collections. "I love a trench," Sander says, "even though I don't wear them often myself. I'm a trained menswear designer. The trench is the most elegant menswear garment besides the tuxedo. There are so many details that are on the trench that you can transfer to so many other garments."

Sander studied fashion at Central Saint Martins in London and graduated in 2008. "I had a very clear idea of who I was as a designer," Sander says. "If you look at my graduation collection, it's literally Sies Marjan." But before forming his own brand, Sander worked at Dries Van Noten, 3.1 Phillip Lim and Balmain (under both Olivier Roustieng and Christophe Decarnin). "I worked for a lot of years, and I'm so happy I did," he says. "A reason for our success now is because I have learned from other people's mistakes. I've seen how things go and how to do things, how to not do things. I've also understood more what kind of boss I want to be and what kind of people I want to hire. And you don't know that when you come out of college. You have no idea."

He adds, "Now I'm not drinking, not smoking, and I'm doing yoga. I wasn't doing that when I was in my twenties. It would have been a mess!"

Sander lives a five-minute walk from his studio. "I'm here so much people sometimes wonder should I live further away to disconnect from work," he says. "I can't disconnect, so I shouldn't even pretend to be able to disconnect. I love to just be able to roll out of bed and come to work."

When asked how he takes advantage of living in the bustling city, Sander swiftly responds, "I don't. I get what I need out of it. Don't ask me what the best restaurants are—I have no idea. That's not how I consume my living space. I really make the most of the location when I'm traveling because then I'm in a mindset of 'let me just really take all of this in.' I love the fact that my world in New York is really small because that makes it feel like home." He has a similar less-equals-more philosophy when it comes to those around him. "Core family and that's it," he says. "I don't do acquaintances; I don't do the 'half' sort of friends or 'let's have drinks.' I don't have a whole crew of people that are my friends. I have a small group of really intimate relationships."

The name Sies Marjan is derived from a combination of Sander's father's surname and his mother's first name. The spring 2019 collection stood out as white was the most dominant color (among other neutrals), and it was an altogether more somber outing. "I don't really work with themes," Sander explains, "but all the collections are very personal. It's what's happening in my life. That collection was about family. It was about my dad and really personal. That's why my mom and friends were in that show." Sander's father passed away when he was younger.

"Family is something that isn't just your blood," he says. "I have this weird apocalyptic tendency. I always think if it's the end of the world, who would you want to be with? Who are these people that you really love so intimately?" 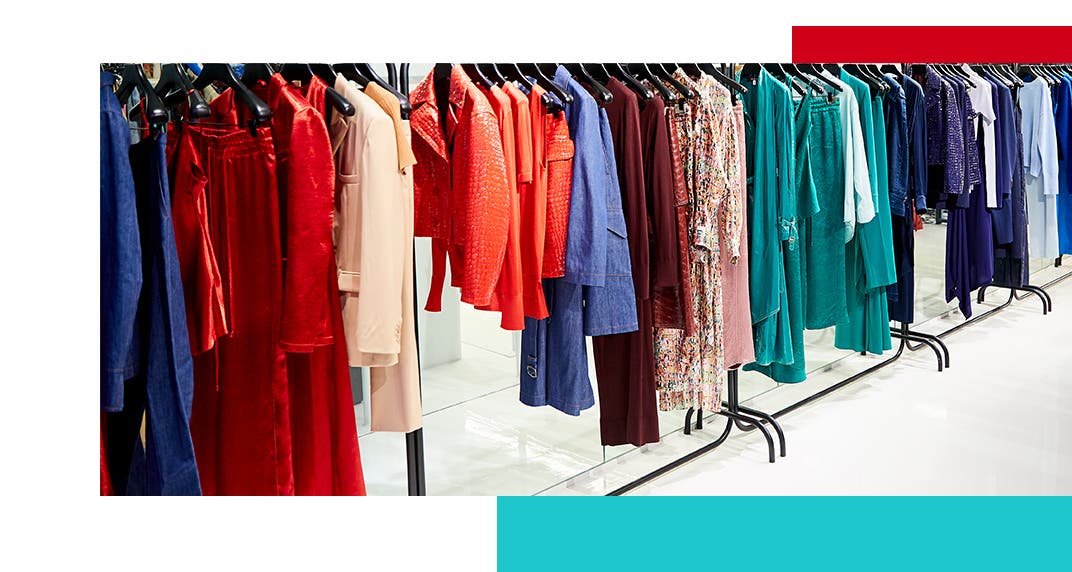 The following collection (which is currently available at Nordstrom) was a return to the color-saturated world of Sies Marjan. "Fall/winter was really about love," Sander admits. "I wanted to be able to translate that from a cliché. I wanted to dive deeper into what it means to fall in love and what it feels like. How you are challenged by yourself and by things you don't like, and you have to compromise with the other person. You fall in love and then the relationship starts."

One of the most striking items in the collection was a gorgeous black dress, which seemed otherworldly after the kaleidoscopic procession. "I find it difficult to work with a matte black garment," Sander says wearily.

Sander explored the compromises one makes with a partner through fabric and hue. "I was challenging myself with colors that I didn't love anymore–like neon, things I was really interested in a few years ago but I got over. I was working with materials I always hated, like lace. I hate lace. I was like, 'How can I make myself fall in love with lace? What can I do with lace? Imagine I have a relationship with lace, how will I make that work for me?' That's how that collection came about."

It took time for Sander to realize that this was his concept. "I didn't know it was about that until almost the end," he says. "It's hard because sometimes my team just needs something very concrete, but I have to follow my gut instinct."