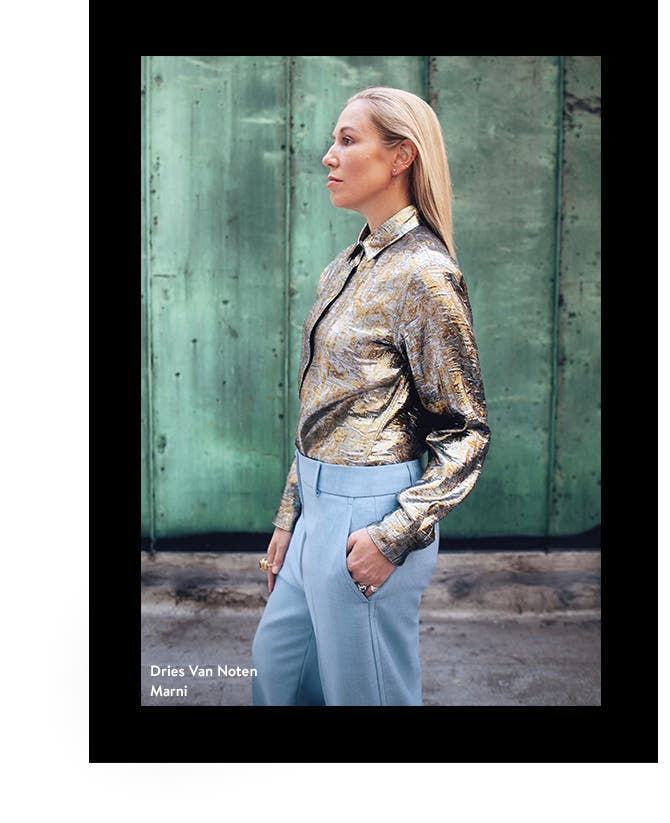 My name is Colleen Herman and I'm a painter living in New York City. Originally from Baltimore, Maryland, I knew as a young girl that I wanted to live and create in New York. My mom brought us up on a bus during the holidays, and the magic felt like nothing else—it's palpable. This sentiment isn't novel by any means—it has led to many cherished friendships with other creative individuals who make their home here. And even in a COVID world—we're still here! Creating and sharing in new ways.

Personal style comes through the way someone carries themselves in the world. The way someone shows up for others. An easy confidence. Personal style is holding doors for people or making the coffee for your love in the morning—it's an acute awareness that little things matter and add up to the bigness of who you are.


How does what you wear reflect how you feel?

I'm happiest in the morning. Seeing the first light come through and when it's quiet. When there's abundant potential for the day. When the world feels new. 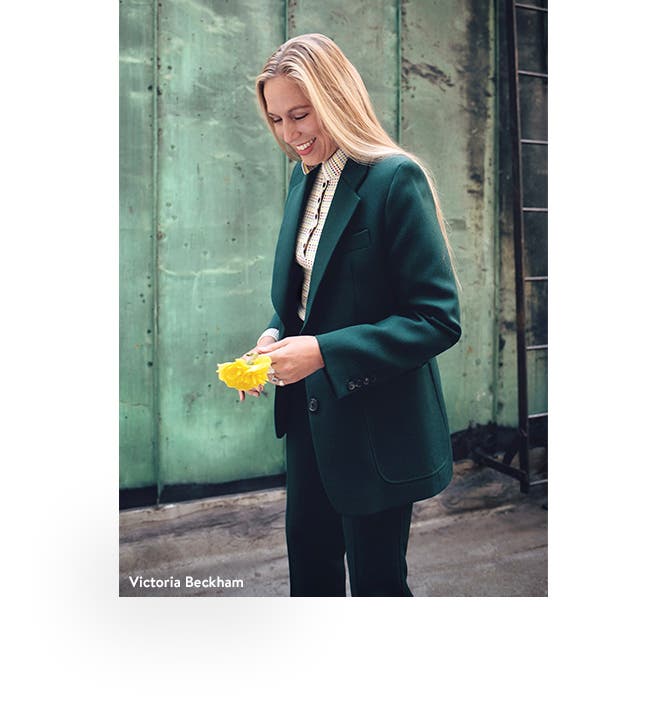 Right now I'm painting full time and I change clothes quite a bit. One outfit for the bike commute, another stash of clothes for stretching or dancing during the day—things to move in—and often something else in the evening for a meetup with friends. Sharper pants, a refined shoe—or just cleaner sneakers! For the past three falls, I have taught a Design Studio class at Parsons for the fashion MFA second-years. It's a class where the students take on a brand as its new creative director and explore how they would affect and change a well-known house or a smaller defunct label. This class stimulates my own fashion passion and opens space for questions and critique on where fashion is today—and where it needs to go. I am so lucky to be able to teach this class, and for sure learn from the experience year after year. 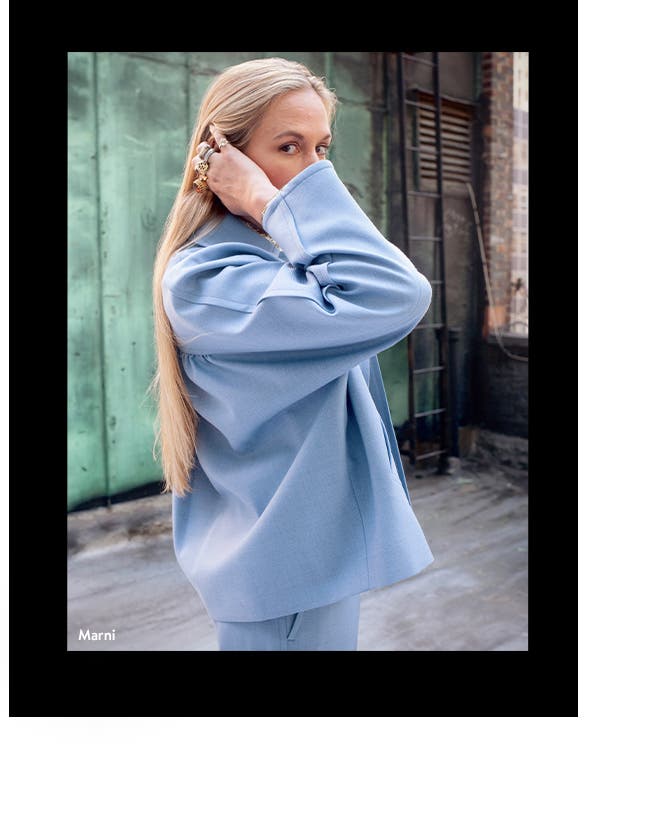 My career journey twists and turns with one consistent thread: I have been flexing creatively and collaborating with others. My first job out of college was assisting the design of fashion accessories—mostly scarves sold in department stores. It was the first time I saw something I touched go from sketch to commodity out into the world—there's a rush from that for an Irish Catholic girl from the suburbs of Baltimore! I went on to design prints and goods for Calvin Klein Home. Home is a sacred space, and to make things that everyone can live with felt super fulfilling and challenging at that time. Color at Calvin was a world of its own. I trained my eyes to see the most minute nuances between tints, tones and shades (of mostly gray). It was akin to working toward a sort of graduate degree in color theory ... which has aided the way I see color and make paintings now. After Calvin I launched a homewares collection called Tenfold New York, which led to projects, short and long, creating identity and media for new and existing brands. I was running Prada's social media for a minute and helping Marie Kondo tell her story visually. I was a creative director helping other CDs shape a vision through still and moving image. Three years ago I started teaching in the Fashion department at Parsons, and I've taught yoga movement since 2009. Moving my own body and getting others to remains paramount in shaping and being a part of community, which is so important in New York. It's the capital of "chosen family," and these niches we are a part of add up to the person we are. All of these experiences are woven into the visual art I create today.

Working with Maria and David to style my looks was a dream! I feel best in clothes that make me stand taller and feel powerful. That comes via strong monochromatic suiting and shoes with sole. The fabrics move and drape dynamically and work in a lot of different scenarios. Designers matter too—I love wearing Stella McCartney in particular for her forever commitment to sparing animals for style. Ahead of her time, a true pioneer blazing trails and opening pathways for all to join the sustainable conversation.

I'm inspired by those who fight for the world they want to live in. From Assata Shakur and Angela Davis to RBG and AOC—women who speak up, speak out and shift the tide. I'm inspired by those who stick to a vision, take time to flesh it out and continue to ask questions. Adrian Piper, Radhika Devi and Agnes Martin come to mind. I'm inspired by the curiosity of my niece and nephews—where does the impetus for their wanderings come from? The joy and wonder is so pure you'd want to bottle it and sip it forever. The way light falls on the floor, or how seeds bear fruit inspires. Thinking of how powerful our minds are—and the potential we have to dream the world into existence is wildly inspiring.

I look forward to aging, to collecting experiences and sharing time with new and old friends. To the thicker skin that comes with being older, so as not to be so affected by pain in some way. Or rather the heightened awareness and resulting change that the feeling of a certain pain provokes. I look forward to collective evolution toward a more unanimous adoption of the Golden Rule. 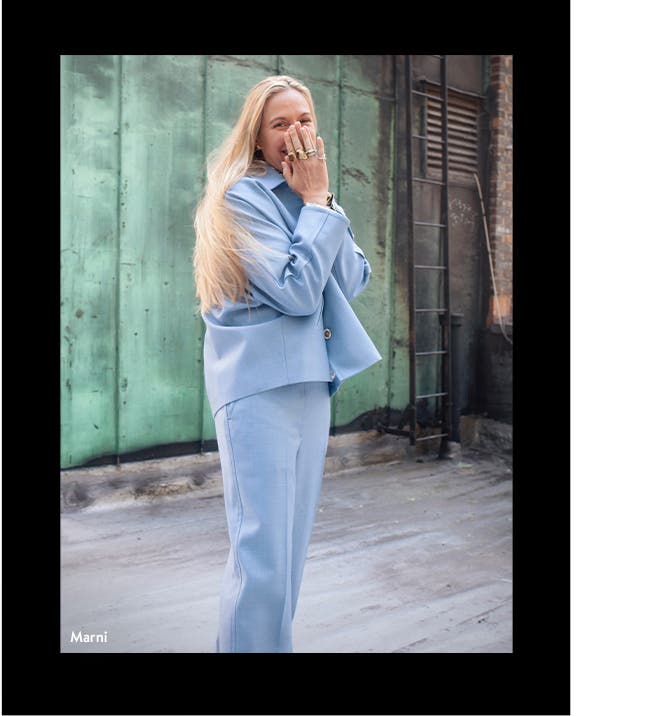