Stylist-turned-designer Brandon Maxwell chats with Alex Nordstrom about their special friendship, how he got his start in fashion and winning the coveted CFDA Award for Womenswear Designer of the Year.

When Alex Nordstrom met Brandon Maxwell, she knew right away that he would become someone significant in her life. The designer made Nordstrom's wedding dress ("and also my mom's dress and my aunt Julie's—and my entire bridal party," she said, laughing), and the two became fast friends. "We hit it off right away because Brandon is one of those people [who] when you meet him, you feel like you've known him for years. I knew how fortunate I was right when I met Brandon because he's so immensely talented, but I didn't even realize how lucky I was to have him in my life as a friend," said Nordstrom, daughter of the late Blake Nordstrom.

"A month after meeting Brandon, I found out about my dad's diagnosis and my whole world turned upside down. And just three days later, Brandon posted about his mom and her diagnosis with cancer," she explained. "This helped me feel that I was not alone. It meant the world to me to work on my dress with someone who really understands the fragility of life and the importance of family. In this time of sorrow, Brandon consistently found ways to lift me up, and that's just kind of [his] MO—he wants to lift women up, he wants to help celebrate women and empower them and enable them to take risks and go out and try to make the world a better place."

"And so I will always be grateful for Brandon for last year," she said while introducing him to the audience during their panel discussion at Nordstrom Live, our biannual, multi-day event filled with runway presentations and conversations with fashion designers, editors and stylists. "To me, he really embodies Nordstrom's values. He is extremely down to earth, extremely hardworking, champions his team like no other and always puts the customer first. I am really proud to wear Brandon Maxwell, now and any day."

"Wow, I'm sweating and crying, thank you!" said Maxwell, which was met with laughter from the audience after Nordstrom's heartfelt introduction. 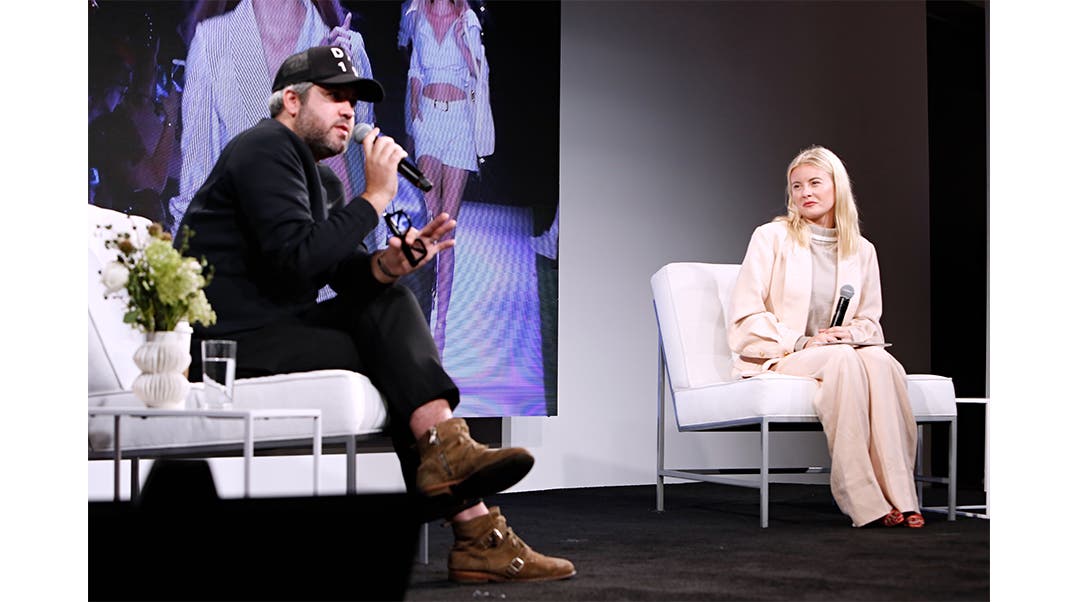 Alex Nordstrom: Let's just start from the beginning about where you're from and your relationship early on with fashion.

Brandon Maxwell: I grew up in a clothing store in East Texas around the border of Louisiana—my grandmother had a store. So, I quite literally grew up under a clothing rack. And as I grew up, I was very into photography. I went to school for photography and making films, and that's how I learned to make clothes. I grew up in a very conservative area of the country, and I was quite different. It was very hard for me to feel comfortable to be out in the world at that time, sometimes just safety-wise. And so I learned at a very young age to meet with my girlfriends, and we would stay in, and I would learn how to do hair and makeup and style them and buy old clothes and cut them and refashion them, and I would do photo shoots with throwaway cameras. And that's how I learned to really kind of rework the world in the way that I thought it should look. So, I went to school for making films and photography, and then eventually I moved to being a stylist in New York for editorials and celebrities and all of that. So that's how I got started, and then one day I was like, "I'm going to start my own collection—that should be easy." Turns out it's not.

AN: What's your design process, and how has it evolved, especially as you've transitioned more from primarily eveningwear to more—especially in the most recent show—casualwear and accessories?

BM: My design process, number one, is a little bit backward: I don't sketch at all. I really start with the fabrics first and foremost before I ever think about a collection at all. And then when they come in, which sometimes is later in the game than we'd like, I just unroll them and I start to either play on a woman or on the form. And now that the collections have gotten bigger, this most recent one in September—for example, the last September show I think was 75 styles—I think this one was 237 total, which is much, much larger.

At this point in my life, like you talked about, I went through a lot of things this year, and I felt lighter coming into this show because the previous show was so dark, and I wanted to free myself from some of that. So, it's different every time. I really design, unfortunately, from a very emotional place. Like wherever I'm at, that's exactly what the collection looks like. If the girl is dancing and having fun, you can bet that that's where I was, and if she's a bit sad and stiff, then that's exactly where I'm at. 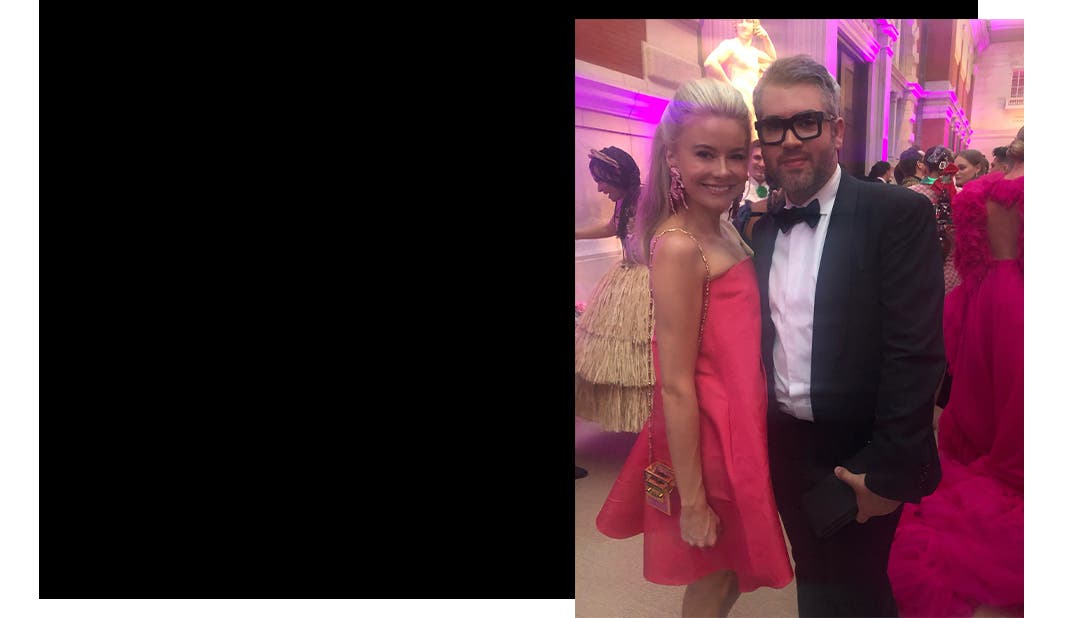 "A photo of Brandon and me from the [2019] Met Gala [in New York City]. He made my dress and let me borrow earrings, a bag and shoes for it."–Alex Nordstrom

AN: Brandon's very humble, so he wouldn't say this, but he won the CFDA Womenswear Designer of the Year Award. So how do you feel about it?

BM: I did try to, in the moments after [winning], think about for a second what that did mean for other young people like myself—people who were different and felt that they didn't deserve to be there, and they could never be there, and they didn't have the access to be there. I don't come from a pedigree of designers, of people who even knew about that. I thought a lot about other young, like-minded people seeing part of themselves there, and I feel very grateful for it. I don't really know why it's occurred, but I'm happy that it did, and maybe one day I'll be able to make sense of it.

I wanted so badly as a young person to leave a mark on the world that would be remembered. That's literally all that beats through my mind in those leading-up moments—I hope that I continue to have the chance to do this. And by "do this" I don't mean be out on a runway or be on TV or be in front of a camera, I mean be with people like yourself, have these moments that are so fulfilling that feel like a high, like a drug to me, that provide me with so much happiness and joy. That's ultimately what fashion is for me: it's a life and it's a medicine. 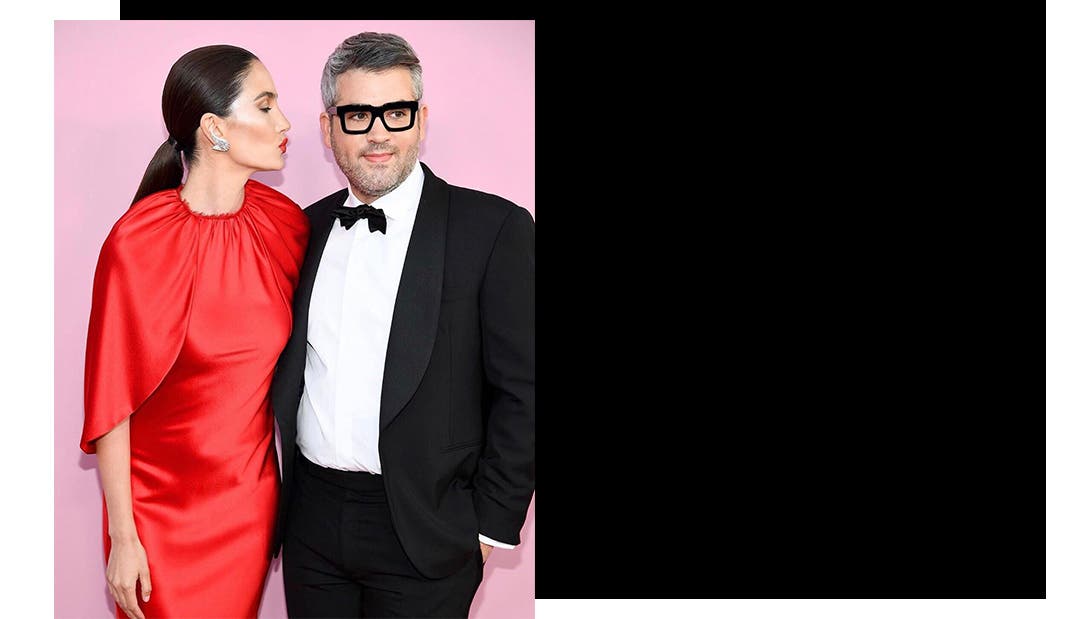 Maxwell with model Lily Aldridge at the 2019 CFDA Awards.

AN: Another reason why I love Brandon is how he combines individuality, and really wanting to celebrate that, but also community through his work. You see that both in your shows with your collaborations, but my favorite is also in his campaigns, where I really see one of the Nordstrom core values shining through of really championing your people and putting them first. I see it very clearly, you wanting to always lead with your values, and one of those values being community. Can you talk us through that?

BM: I think it's really about selling the idea of what the brand stands for—who the woman is, what she believes, what she does with her life. Those personal experiences, I think, are important and they matter, and I don't want to sell to young people who are looking at us and some idea of perfection that is never going to exist. Like, you're just never going to have that, and I don't have that, and I didn't have to have that to get to where I am. And that's the point.

It's so much more than a dress. A woman can go get a dress anywhere. She needs to know why she's wearing the dress. Why? What does it mean? What is it for? When she zips it up, she zips it up for every young woman who's in there in that campaign. That's what it means, and that's who the Brandon Maxwell woman is: a woman for other women.