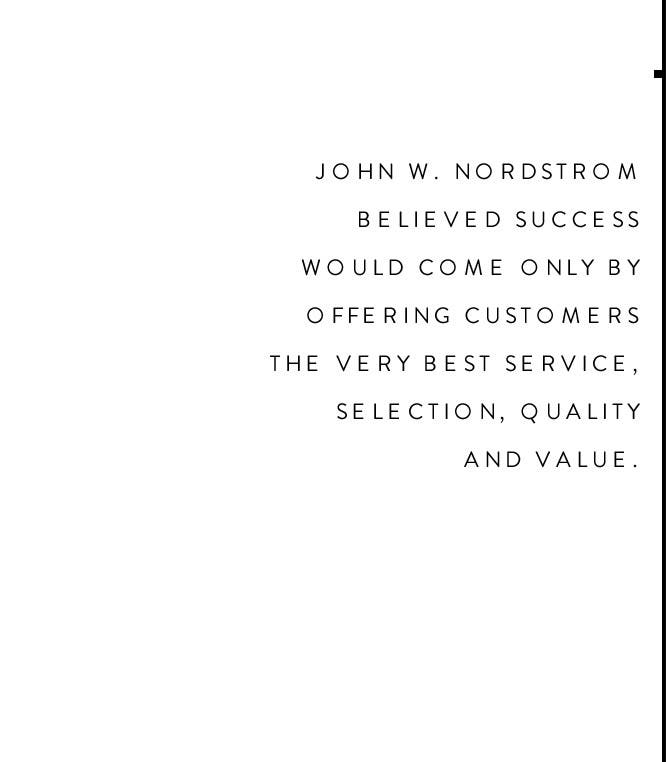 In 1887, John W. Nordstrom, at 16 years old, left Sweden for the United States. He arrived in New York with $5 in his pocket, unable to speak a word of English.

The young immigrant labored in mines and logging camps as he crossed the country to California and Washington. In 1897, he headed north to Alaska and the Klondike in search of gold. Two years later, he returned to Seattle with a $13,000 stake, ready to settle down.

Carl F. Wallin, a Seattle shoemaker Nordstrom had met in Alaska, offered him a partnership in a shoe store. In 1901, they opened their first store, Wallin & Nordstrom, on Fourth and Pike in Seattle.

The business grew and, in 1923, the partners added a second store in Seattle's University District.

In 1928, John retired and sold his share of the company to his sons Everett and Elmer. Carl Wallin retired a year later and also sold his share to the Nordstrom sons. John's third son, Lloyd, joined the team in 1933.

By 1960, the downtown Seattle shoe shop had become the largest shoe store in the country, and the company, now with eight locations in Washington and Oregon, was the largest independent shoe chain in the United States.

Looking for new ways to spread its wings, Nordstrom ventured into the women's clothing market with the purchase of Seattle-based Best's Apparel in 1963. With the purchase of a Portland, Oregon, fashion retailer three years later, Nordstrom now offered Northwest customers a selection of shoes and apparel under the name Nordstrom Best. Men's and children's wear were added in 1966.

Going public in 1971, the company was formally renamed Nordstrom, Inc. Two years later, annual sales surpassed $100 million, and the company was recognized as the largest-volume fashion specialty store on the West Coast.

In 1973, the first Nordstrom Rack opened as a clearance center in the basement of the downtown Seattle store.

By 1975, Nordstrom had expanded into Alaska. Three years later the company entered the competitive California market. And in 1988, it opened its first East Coast store in Virginia.

Expansion continued across the U.S. throughout the 1990s and into the next decade.

In 1995, the third generation of Nordstrom family members retired as co-chairmen, but retained their positions on the Board of Directors. In May 2006, Bruce Nordstrom retired from his position as chairman of the Board.

In 1998, Nordstrom began serving customers online at Nordstrom.com. By 2009, Nordstrom had implemented industry-leading inventory management and order fulfillment capabilities to provide a seamless shopping experience both online and in stores. That same year, Nordstrom began shipping orders abroad, and it currently serves 96 countries online. In the years that followed, the company greatly enhanced the features and functionality of its website, introduced mobile shopping apps, and began offering customers free shipping and free returns within the U.S.

At the start of the new millennium, Nordstrom entered several strategic alliances. From 2000 to 2007, the company owned Façonnable, an upscale European apparel collection for men and women. In 2005, the company purchased a majority interest in Jeffrey, two luxury fashion boutiques in Atlanta and New York City. In 2011, Nordstrom acquired Los Angeles-based HauteLook, and also purchased minority stakes in kids' wear brand Peek. In 2012, Nordstrom became the only major U.S. retailer to sell a broad assortment from the renowned British fashion brands Topshop and Topman. In 2014, the company acquired Trunk Club, a personalized clothing service that serves customers online at TrunkClub.com and in its seven clubhouses.

From 2011 to 2013, Nordstrom operated Treasure & Bond, an independent charity-concept store in Manhattan that donated 100% of its profits to New York children's charities and raised more than $200,000. In 2014, Nordstrom launched its private-label Treasure & Bond brand, and in the spirit of the store's give-back model, announced it would donate a percentage of profits from sales to youth-empowerment organizations.

In September 2014, Nordstrom opened its first Canada store at Chinook Centre in Calgary.

Nordstrom furthered its expansion in Canada in 2015, 2016 and 2017 with the opening of full-line stores in Ottawa, British Columbia and Toronto. The company has plans to open Nordstrom Rack stores in Canada starting in 2018.

In 2015, Nordstrom also opened a full-line store at The Mall of San Juan in Puerto Rico.

Today, Pete and Erik Nordstrom serve as co-presidents of Nordstrom, Inc., and manage the company along with the executive team. From one tiny shoe store, Nordstrom has grown into a leading fashion retailer with global reach. It offers an unparalleled selection of shoes, clothing, accessories, home goods and gifts—and an extensive range of services to make shopping fun, personalized and convenient.